March 21, 2013 — Risë Stevens, the internationally renowned mezzo-soprano who had a 23-year career with the Metropolitan Opera, where she practically owned the role of Carmen during the 1940s and ’50s, died on Wednesday at her home in Manhattan. She was 99. 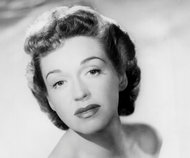 Risë Stevens had a 23-year career with the Metropolitan Opera. 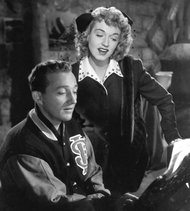 On the Met’s roster from 1938 to 1961, Ms. Stevens was a superstar in an era when operatic superstardom was conferred mostly on sopranos and tenors. A Bronx native from a modest background, she was widely admired as a populist who help democratize the rarefied world of opera. She was known to a large public not only through her recordings and recitals, but also through her appearances on radio and television and in motion pictures.

After retiring from the stage, Ms. Stevens had a prominent second career as an arts administrator with the Met and as president of the Mannes College of Music in New York City.

As a singer, Ms. Stevens was known for her acute musicianship, her expansive repertory, her accomplished acting and, in particular, her warm, velvety voice. (In 1945, Lloyd’s of London insured her voice for $1 million.) Though she occasionally sang Wagnerian roles early in her career, she soon abandoned them in favor of the less heavy, though no less rich, parts to which her voice was ideally suited.

Besides Carmen, her best-known roles included Octavian in “Der Rosenkavalier,” by Richard Strauss; Dalila in “Samson et Dalila,” by Camille Saint-Saëns; Cherubino in Mozart’s “Marriage of Figaro”; Prince Orlofsky in “Die Fledermaus,” by Johann Strauss; and the title role in “Mignon,” by Ambroise Thomas.

Ms. Stevens appeared regularly with leading opera companies around the world, among them the Glyndebourne Festival Opera in England and La Scala in Milan. In Hollywood, she sang in “The Chocolate Soldier” (1941), with Nelson Eddy, and in “Going My Way” (1944), with Bing Crosby; she also supplied the voice of Glinda the Good Witch in the animated film “Journey Back to Oz” (1974). On television, she appeared often on “The Ed Sullivan Show” and “The Tonight Show.”

Despite her acclaim, Ms. Stevens was by all accounts a down-to-earth diva, as comfortable singing Broadway musicals — as she did in a 1964 production of “The King and I,” by Rodgers and Hammerstein, at Lincoln Center — as she was singing Bizet. As the magazine Opera News wrote in 2006, Ms. Stevens “was perhaps one of the sanest big opera stars of her time.”

The daughter of a Norwegian-born father and an American Jewish mother, Risë Gus Steenberg was born on June 11, 1913, in the Bronx, and reared in a railroad apartment there. (Her given name is pronounced REE-suh; her middle name was after an aunt, Augusta.) Her father, Christian Steenberg, was an advertising salesman and by all accounts a heavy drinker. Her mother, the former Sadie Mechanic, recognized Risë’s vocal talent early and was an enthusiastic steward of her youthful career.

As a girl, Risë earned a dollar a week singing on “The Children’s Hour,” a Sunday morning program on the local radio station WJZ. (The program’s host was Milton Cross, who later became famous as the voice of the Metropolitan Opera’s Saturday afternoon radio broadcasts.) She took the professional name Risë Stevens as a teenager.

When Risë was 14, the family moved to the Jackson Heights section of Queens. By the time she was 18, she was appearing regularly, sometimes in leading roles, with the Little Theater Opera Company, a Brooklyn troupe. (The company was later known as the New York Opéra-Comique.) In the audience one night was Anna Schoen-René, a well-known voice teacher on the faculty of the Juilliard School. She began teaching Ms. Stevens privately, and arranged for her to attend Juilliard on a scholarship, starting in the fall of 1933.

The summer before her scholarship took effect, Ms. Stevens helped support herself and her family by working in the garment district of Manhattan as a fur-coat model, an unenviable job in the days before widespread air conditioning. She later earned money singing on the radio show “Palmolive Beauty Box Theater.”

Returning to New York, Ms. Stevens entered the first Metropolitan Opera Auditions of the Air in the winter of 1935-36. Broadcast live on the radio, the auditions offered the winning singers one-year contracts with the Met. Ms. Stevens lost, though a few months later, when the Met asked her to sing Orfeo in Gluck’s “Orfeo ed Euridice,” she declined. She realized, she said afterward, that she was not yet ready.

Ms. Stevens returned to Europe, making her formal operatic debut in Prague, as Mignon, in 1936. Joining the Met in 1938, she made her first appearance with the company on Nov. 22, singing Octavian out of town in Philadelphia. On Dec. 17, she performed for the first time on the Metropolitan Opera stage in New York, singing Mignon.

Reviewing that production in The New York Times, Olin Downes called Ms. Stevens “a new debutante of unquestionable gifts, both vocal and dramatic.” He added, “It is a voice that should carry its possessor far.”

In 1939 Ms. Stevens married Walter Surovy, a Hungarian actor who was later her manager; they remained married until his death in 2001. Besides their son, Nicolas, a film and television actor, Ms. Stevens is survived by a granddaughter.

In her nearly quarter-century with the Met, Ms. Stevens was most famous for Bizet’s “Carmen.” She sang the title role 124 times with the company, many of them opposite the distinguished tenor Richard Tucker as Don José. Over time, Ms. Stevens forsook the traditional interpretation of Carmen as a saucy temptress, playing her instead as “hard, calculating, tough and one step away from a prostitute,” as The International Dictionary of Opera said in 1993.

Ms. Stevens retired while in her prime. Her last performance with the Met was, fittingly, as Carmen, on April 12, 1961. In 1964 she was named, with Michael Manuel, a general manager of the new Metropolitan Opera National Company, a touring ensemble. (Lacking funds, the company folded in 1967.) Ms. Stevens was later the executive director of the Metropolitan Opera National Council Regional Auditions.

In 1975, Ms. Stevens assumed the presidency of the Mannes College of Music, a small, prestigious conservatory in Manhattan that is today part of the New School. She helped the college overcome a potentially crippling budget deficit and recruited world-renowned musicians, including the pianist Vladimir Horowitz, to the faculty. She resigned in 1978, citing intractable differences with some members of the school’s board.

Among Ms. Stevens’s awards are an honorary doctorate from Mannes in 1980. In 1990, she was an honoree of the Kennedy Center in Washington.

On records, Ms. Stevens sang Hänsel in the Met’s first recording of a complete opera, Engelbert Humperdinck’s “Hänsel und Gretel,” in 1947. Her many other recordings include the Kurt Weill-Ira Gershwin musical “Lady in the Dark” in 1963. She was the subject of two biographies: “Subway to the Met” (1959), by Kyle Crichton, and “Risë Stevens: A Life in Music” (2005), by John Pennino.

In Ms. Stevens’s 351 regular appearances at the Met, her professionalism was perhaps never more apparent than it was in one of her many productions of “Samson et Dalila.” Playing the temptress Delilah, Ms. Stevens reclined on a chaise longue to sing the aria “Mon coeur s’ouvre à ta voix,” among the most famous seductions in opera. One night, overcome with theatrical passion, Samson flung himself onto her mid-aria.

Samson did not know his own strength. Under his considerable force, the chaise longue, on casters, began to move. Ms. Stevens sailed offstage and into the wings, still singing.